TOMRA circular economy communicator Kristine M. Berg shares her experiences on board final week of the eXXpedition voyage's first leg, as the crew discusses solutions to marine litter and approaches land at last. 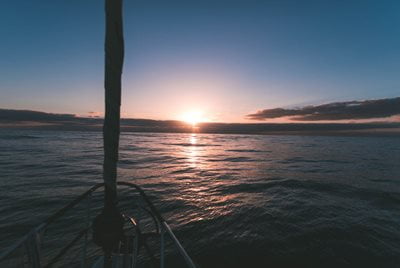 It's our last week on the TOMRA-sponsored eXXpedition mission to track ocean plastic across the North Pacific Gyre, sailing towards Vancouver in contemplation and building weather. (Check out my Week 2 diary here.)

In Norwegian, the literal translation for the Pacific Ocean is “the Quiet Ocean”. Well, I can tell you it has been everything but! Although, I have learned to prefer strong winds (which at least have a steady direction) over feeble, shifting winds (which increase the comfort of life below deck but do nothing for navigation at the helm). We have also been wearing all our foul-weather gear since day 4 of the journey, in chilly temperatures that had me wearing absolutely all my clothes at once every time I was on watch.

With a maximum of five hours’ continuous sleep in a day, we don’t always jump out of our bunks with glee when awoken in the middle of the night. One thing that helps is when whoever wakes you up whispers gently: “the stars are amazing”, or “the sunrise is gonna be incredible”. Crawling up on deck at 4am one day, the ocean was completely calm. It is like teleportation to another world.

Seeing the scale of the issue
During the week, an albatross took flight and followed us for a while, and a pod of dolphins came out to play. Never before had the crew moved with such speed and synchronicity! Everyone was up on deck in a heartbeat. It was bittersweet to finally see these beautiful creatures in their natural habitat, while they at the same time knowing they are feeding in the densest accumulation zone of marine plastic on the planet. One of the things I have learned is that it is impossible for wildlife to understand what is plastic and what is food in this of soup of microplastics we saw out there. 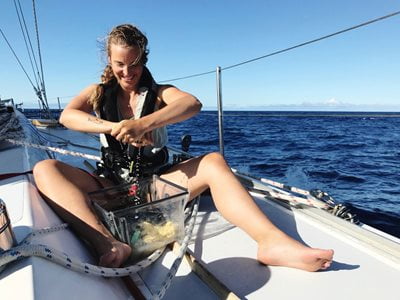 Sailing into the night, we crossed the shipping lane from California to China. Here we met a massive tanker, the first ship we’d seen since leaving Hawaii two weeks before. This made us stop and think not only about consumption lifestyles, but also how absolutely brilliant it had been to be completely alone and remote from everything for two weeks. As we crossed the wake of the tanker, we were hit by a wall of exhaust. It smelled like everything we had escaped for two weeks. Some might think seeing another ship might induce relief with the crew, but honestly we all agreed – jokingly – that we should turn back and stay away from land as long as possible.

Life at a flat angle – without strong winds forcing the boat to lean – had a mellowness and urgency to it at the same time, because we knew we needed to enjoy this fleeting moment of calm. Showers were had and laundry was hung to dry on the railings. 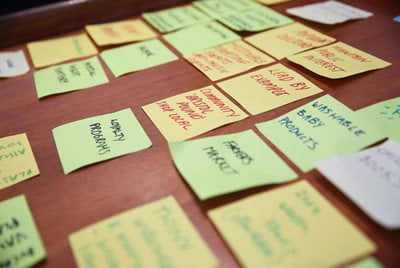 The science work kept on for a few days after this in manageable conditions, and we were seeing less and less plastic in our samples. Still, debris would float by every few minutes, without pause. We made good use of these flat conditions to spend a couple of nights doing workshops. We discussed what solutions are needed to remedy this complex problem, all along the value chain from damage control at the ocean, up to innovation and policy actions at the source of plastic pollution. Solutions to marine litter is where TOMRA plays a role, as reverse vending enables recycling to ensure less plastic and other packaging materials end up littering our oceans.

We also discussed where along this spectrum we as individuals can work. We made specific commitments to projects or ideas that we as a team will work on in the coming months. As ambassadors not only for eXXpedition but also for our oceans, we now have a unique opportunity and responsibility to create change.

Approaching land
But, as we approached land (ahoy!), the weather picked up. A lot. Imogen, our skipper, was constantly updating us on the prognosis and we knew that some heavy weather was about to hit. The last 24 hours before reaching Canadian waters were a bit rough. No one got much sleep. We even stopped making tea, because the motion of the gimbal stove was too dangerous to make boiling water on. During a morning shift with Emily and Karine from 4am, we were focused, soaked, cold, and taking in the burning red sun that rose from the horizon. Wind was up to 40 knots, the waves were consistently 3-4 meters, and once again the sails were either furled or reefed. Sea Dragon truly is a beast of the sea and I had a blast rolling her around those massive waves, which from time to time would soak us with so much water we literally had to hold our breaths. 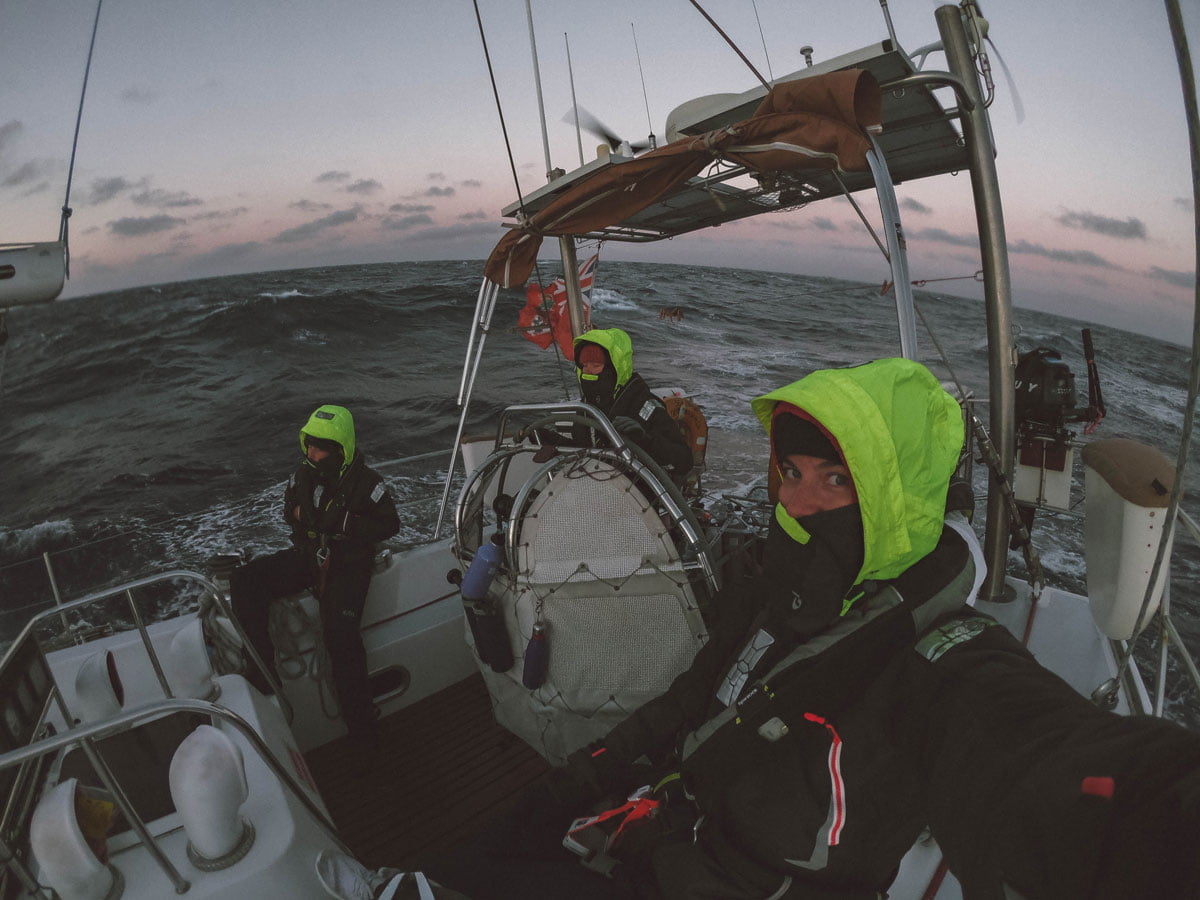 Sailing at sunrise a few days later into Vancouver, Jess, the deck hand, suddenly exclaimed: “It smells like camping!”. And she was right. We sailed straight into the solid perfume of pine trees, a smell that followed us all the way into Vancouver. What a welcome to shore that was! Those early morning hours we discussed what we looked most forward to about coming ashore (avocados, orange juice and a shower – in that order), and why it felt strange to finally be arriving. We sailed so hard to get here, and still it felt bittersweet.

Although more than a thousand miles from land, we never felt alone or scared. We had everything we needed on board the boat, in each other and in ourselves. We became family, and it was hard to imagine what life on land would be like, everyone going their separate ways. Our lives will never be the same, we have been through a transformative experience together, and we are connected by the ocean and our love for it. Now the real work begins, with solutions on land. (Although, I must declare, this will definitely not be the last ocean I cross.)

Aloha, and thank you for all your support on this amazing voyage!
- Kristine