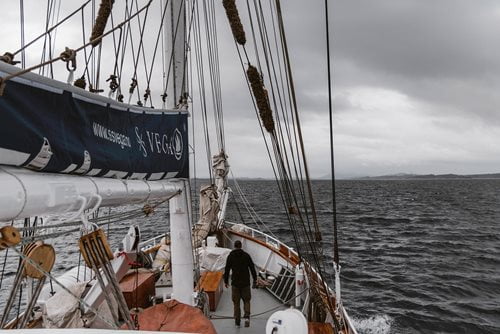 This month, I will cross the North Pacific with eXXpedition, on a TOMRA-supported mission to research the plastic problem in the Pacific Gyre. In preparation for the voyage, I was invited on board S/S Vega in May to find my sea legs and help arrange Norway’s biggest beach cleanup.

S/S Vega is a 110-year-old sailboat that looks and sails sharp for her age, and for having sailed in both World Wars. Departing from her home port of Oslo, she travelled along the coast past Stadtlandet, known as the roughest sea in Norway, before journeying back to Oslo – all in the name of protecting the health of our oceans.

The voyage was part of an initiative by Hold Norge Rent (Keep Norway Clean), an NGO that works nationally and internationally with litter prevention and clean-up activities. Its initiative, Norway’s national Beach Clean Day, has been an annual event since 2011. With increasing momentum around marine litter, S/S Vega was commissioned to sail for two weeks, with a full program of events en route to raise awareness of the problem and solutions around marine litter, and get people excited about the Beach Clean Day. Artists, politicians, NGOs, kids, national news and businesses were invited on board to contribute to everything from talks to plastic art workshops. 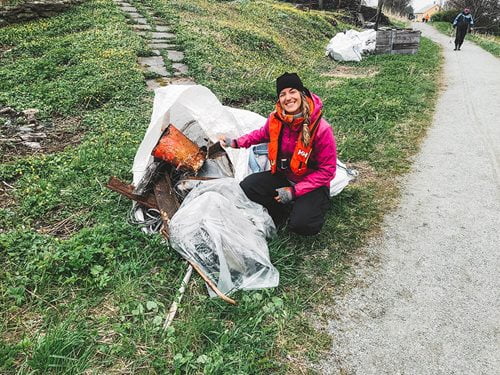 I joined the crew on their journey back to Oslo. The first thing I did was unintentionally give my crew mates an impression on what kind of sailor they were about to take in. I was on shore chatting to some guests from a TV broadcast, when the woman I was talking to leaned out and waved… at which point I realized she was waving goodbye to the boat, which had left the dock and was about to head to sea – without me on board. I made a run for it, and without any style whatsoever, make it on board.

Awesome. Now I had 4 more days to prove I am, in fact, not a complete idiot.

The next morning, I was woken before dawn by being knocked into my sidewall by a rather adamant wave. Reflecting on the North Pacific crossing this summer, I had a brief moment of “how am I going to do this?”, but stepping out on deck in the wind and salt spray with a cup of scalding hot morning coffee quickly remedied that.

After losing a few card games and playing catch with Maia, the ship dog, we arrived in sunny Bergen. As part of the voyage, S/S Vega would host live shows on national television with a variety of key people in marine litter and ocean conservation. The show in Bergen was to be the biggest yet, so media personalities and TV-crew were coming and going all day to prepare.

My fellow crew included people such as Malín Jacob (Project Manager of Beach Clean Day and Mission Leader), Fredrik Myhre (Senior Advisor on marine conservation with WWF Norway), David Eidsvoll (Norwegian Institute for Water Research), and Arild Hermstad (Green Party Norway), plus the father and son captain and skipper of S/S Vega. All were incredibly inspiring people with a profound connection to the ocean, and there were many great conversations about land-based solutions to an ocean-borne problem. It was a learning experience for me as well, explaining container deposit system design and recycling in so many different contexts!

My last stretch of sea

We departed Bergen in the small hours of the morning. Around midday, a couple of people decided to venture out on deck for some fresh air, rather than let the rolling sea get the better of us inside. Our adventure didn’t last long, and we returned completely soaked with rain and seawater. The choppy conditions led to a more exciting arrival than planned, when the entire crew on deck pulled together to maneuver a hair-pin turn in strong current… with a 26-meter-tall mast close to a 22-meter high bridge. All that remained then was to prepare for the key event the following day: the Beach Clean Day.

A record high of 100,000 people signed up all over the country to clean the Norwegian coastline. The Minister of Environment spoke during the official opening ceremony. Divers prepared to lift a sunken boat and an old car wreck from the seabed, kids made imaginary monsters and beautiful crowns from ocean trash in our art workshop, and we filled an empty aquarium with treasures and trash found directly beneath the dock.

I joined beach-clean volunteers to a nearby island, where we found hundreds of kilos of trash. Although it’s daunting to face how much litter is actually out there, I heard kids and adults all around me talking about what they can change in their lives to make sure they don’t add to the problem in future. Cleaning nature is empowering: once you see the trash, you can never un-see it. And you’re not likely to throw something on the ground once you have spent time picking up someone else’s trash. That is the power of cleanups. 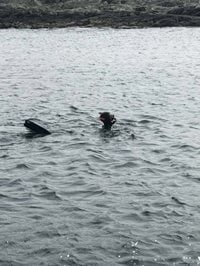 As Vega continued south the next day to host the Norwegian crown prince and princess, both passionate about the ocean, a friend took me freediving for the first time. Not naturally comfortable in a mask and snorkel, my amazement about life under water soon overpowered my worries.

I won’t gush about all the tiny jellyfish I made friends with, but I will say that Sir David Attenborough was right (of course): “People won’t care to save something they don’t know anything about”.

Although the inspiring people I met and the empowering conversations we had gave me motivation to keep protecting the ocean, nothing quite moved me like spending time out in the blue, seeing colors and feeling currents that connect me to this great, big space that we know so little about. The ocean doesn’t separate continents, it connects them. And I am proud to work for a company that works to protect our oceans every single day.