As TOMRA announces its support of ocean plastic research mission eXXpedition, meet the TOMRA colleague rolling up her sleeves on board the voyage and sharing her expertise in solutions for protecting oceans.

TOMRA community manager and circular economy communicator Kristine M. Berg will join as a crew member for the next highly anticipated all-women plastic research voyage of eXXpedition, sailing through the North Pacific Ocean to document the Great Pacific Garbage Patch in July 2018.

BORN AND RAISED TO MAKE A DIFFERENCE 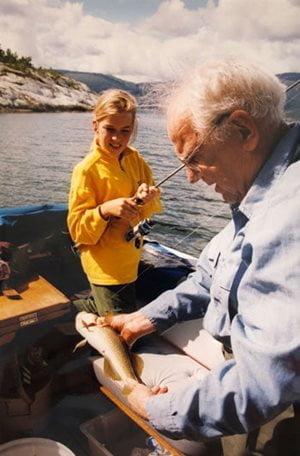 From devouring map books and nature documentaries to having a tadpole as her first pet, Kristine has been interested in nature and the environment ever since childhood. Raised in the city of Trondheim, Norway, Kristine spent many summers on a boat in a picturesque coastal town along the country’s longest and deepest fjord, where her grandfather taught her and her siblings everything he knew about fishing and the sea.

“I remember being annoyed with my mother as a child, because all the other girls in my class were in a book club for novels about horses, while I got kids’ magazines from National Geographic in the mailbox every month,” she recalls. “It turned out for the best for where I am today though, it was probably in the cards!”

At university, Kristine co-organized an outdoor recreation and climbing group, and was active in student politics. She moved to Hawaii to study international law and politics, before returning to the Norwegian University of Science and Technology (NTNU) to complete her bachelor in political science. There, she continued on to a master program in Industrial Ecology, the science behind circular economy, to learn more about how human activity affects the climate. Kristine was part of a team that modeled and tested the concept of wave-powered desalination of water in Cape Town, worked with EAT Foundation on how to feed the world in more sustainable ways, and moved to Bali to work with a surf camp. “Here I learned again how important the ocean is for so many people, but at the same time saw it ruined by terrible waste handling and huge amounts of single-use plastic.”

It was two weeks after returning to Norway from Bali, unemployed and moving back in with her mother, that Kristine met TOMRA at a career fair at her former university. Instantly seeing an alignment with TOMRA’s goals of recycling, circular economy and reducing land and marine litter, Kristine landed what she describes as her dream job in January this year.

“Oh, my goodness!” exclaims Kristine when asked why the role of community manager and circular economy communicator at TOMRA appealed so much to her. “I get to travel around the world and talk to people about why plastic shouldn’t be in the ocean. I also love that as community manager I get to work both internally with our business but also outside the company with our community. It’s a great mix, and I see so much potential.”

Reflecting on her first few months at TOMRA, Kristine describes the company as a really good place to work, as evidenced by the colleagues who have dedicated so long in their careers to TOMRA. “Our technology is so cutting-edge, and yet our team working here is so humble about the world-class work that we do: we help save the world,” she adds. Kristine enjoys the international reach and atmosphere of the organization, and that even as a 45-year-old market leader TOMRA is still very nimble and always at the ready for new challenges.

VOYAGE WITH A VISION 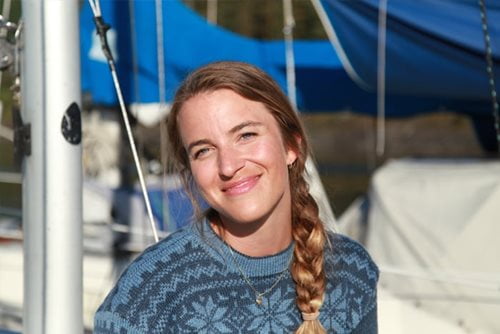 Kristine first heard about the eXXpedition voyages back in 2014. “I thought it would be so cool to be part of, but with the huge amount of interest and applicants, I didn’t imagine at all that I would be selected,” she explains. A few weeks after joining TOMRA in January, Kristine met up with a marine biology contact and a former eXXpedition crew member, who jogged her memory about the project – one week before the application deadline for the next voyage.

Kristine will be part of the crew’s Expert team, which is focused on different solutions for protecting oceans. With her background in Industrial Ecology and sustainability, and connection to circular economy and container deposit systems via TOMRA, Kristine brings unique and vital expertise to the eXXpedition team.

Aside from contributing her knowledge and experiencing first-hand the real scale of the marine litter issue, Kristine says she is most looking forward to the teamwork element of the eXXpedition voyage, and simply being out on the ocean. “I actually can’t wait to take the night shift, just to be out on the deck in the middle of the night and seeing the stars from horizon to horizon, away from all the light pollution. I’m going to feel tiny.”

Kristine confesses to being nervous about the voyage (and especially the possibility of seasickness). “When we depart Hawaii, there’ll be no turning back. It will definitely be a big challenge, but I feel ready for it. I’m going to come out the other end a better person and a better sailor, and to truly open my eyes to the impact of plastic and litter on our oceans – so I can help open the eyes of others. I hope I can really contribute to the success of the eXXpedition voyage and its important work raising awareness of marine pollution.”

Stay tuned for Kristine’s adventures and experiences on board the eXXpedition North Pacific 2018 voyage, which departs from Hawaii on June 25 to move through the Great Pacific Garbage Patch and arrive in Vancouver on July 15, before sailing further to Seattle. Bon voyage, Kristine, and thank you for getting involved in eXXpedition!