Fresh back from a voyage with the eXXpedition all-female ocean plastic research mission, meet a woman from TOMRA rolling up her sleeves to join as a crew member and witness the marine litter problem first hand 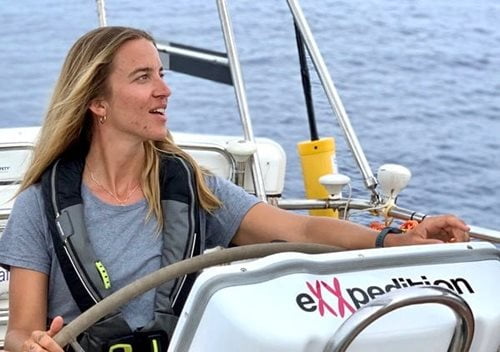 TOMRA circular economy advisor Kristine M. Berg has now returned from the eXXpedition voyage from Easter Island to Tahiti. The journey took the crew past some of the world’s most remote uninhabited islands and sailed through the South Pacific gyre, seeking to measure the impact of plastic pollution and raise awareness of the problem.

This was not Kristine’s first up-close-and-personal encounter with ocean plastic. She also joined eXXpedition’s North Pacific 2018 voyage from Hawaii to Canada through the Great Pacific

Garbage Patch, the planet’s largest accumulation zone for ocean plastics. Conversely, the South Pacific gyre is the smallest of the five oceanic trash gyres. Kristine looks back on her journeys across these two contrasting plastic accumulation zones, in the world’s largest ocean.

What the ocean can teach you

Surrounded by and connecting five continents, the Pacific Ocean is influenced by all these lands. This is why the two gyres in the Pacific, on either side of the equator, are so different. Around 90% of the world’s population lives in the northern hemisphere, with just 10% south of the equator. However, research estimates that plastic influx into the ocean is divided 70/30. This is due to factors on land, such as collection rates, waste infrastructure, types of plastic sold, and their purpose. Combined with weather systems and ocean currents, this results in two very different accumulation rates in the gyres.

Kristine Berg shares that the biggest learning that she took away from researching ocean plastic in both gyres is also a depressing one: that we’re never going to be able to clean it up. “After plastic ends up in the ocean it becomes so small and broken down, and it’s just so omnipresent; how many trips out here would it take to clean it up? Even after we had been sailing for over a week, we still saw more and more signs of human life from land floating around us.”

However, this lesson is also a cause for optimism, as it shows that where we need to focus is not solely on clean-up, but also on stopping the plastic from entering the oceans in the first place. “If we want to solve it, we have to do it on land,” Kristine explains. “Which is great news, because that means we can all get to work right where we are! We have a lot we can do already; we just need to get going on it and not wait for a magic silver bullet to solve it, because that doesn’t exist for something as complex as ocean plastics.” 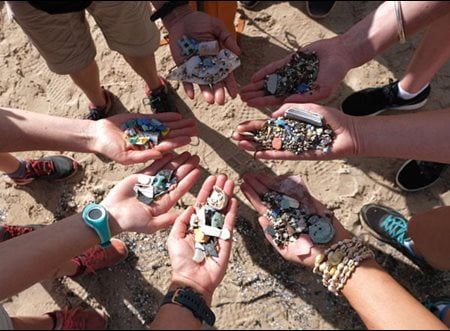 As well as Kristine’s larger learnings from her journeys, several confronting moments drove home the importance of stopping the flow of plastic to the oceans. One night during the North Pacific voyage, the crew watched a documentary about the plight of the albatross on Midway Island. These large seabirds spend most of their time on the ocean, which is essentially a soup of microplastics floating just beneath the water’s surface. Albatrosses pick up these pieces of plastic and mistake them for food, in turn feeding it to their young. The baby albatrosses die of starvation before they even learn to use their wings to fly or go to sea themselves.

The day after watching the documentary, the crew spotted a lone albatross flying alongside their boat, and Kristine confesses the sight brought her to tears. “No matter where that albatross flies, it is going to find plastic to feed its children. That night, I put on all my foul-weather gear and went up on deck in the dark and the rain, and just sat and cried. Because I realised that these animals are in pain and suffering horrible deaths, simply because we don’t handle our plastic on land properly. It’s so unnecessary and ridiculous, but it’s a very real impact that happens because of it.” And – Kristine emphasizes – the struggle of the albatross is not a one-off; it is now the cycle of life out there for birds, whales and other marine animals.

The recent South Pacific journey was also confronting. When the crew sailed past some of the world’s most remote uninhabited islands, in the Pitcairn group, Kristine saw through binoculars that the beaches were covered with small and large pieces of plastic debris. She could see fishing nets hanging from the trees on the shore, no doubt thrown up there by waves and wind. “Even though there is less plastic in the South Pacific gyre compared to the North Pacific, we are still finding plastic everywhere, and microplastics in every single sample,” says Kristine.

A second helping of plastic soup

Despite such provoking take-aways from her first voyage, Kristine was ready and eager to tackle the plastic pollution crisis again on the next journey. “The previous journey changed my life personally and professionally, having sailed with these incredible women. It’s easy to get climate anxiety, but to meet other people who are dedicating their whole lives to being changemakers feels incredibly empowering.” 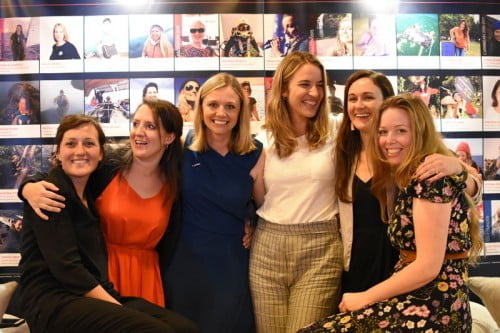 Kristine enjoyed the camaraderie, and simply being out at sea studying part of the world that so few people get to see. “I wasn’t even sure how to mentally prepare for Easter Island, which has special meaning for me as a Norwegian. It is a unique, thriving community in such an incredibly remote part of the world.”

The circular economy advisor also sunk her teeth into the research studies being conducted on board, with eXXpedition this time leading the science rather than collecting and analyzing samples on behalf of other research programs. “The science has evolved. We are looking at pathways for how things end up in the ocean and what type of material it is, because that can be a tool for developing policy around the management of plastics and waste.”

One innovation since Kristine’s last voyage was having an FTIR (fourier-transform infrared) spectrometer on board, so that the crew could immediately examine any microplastic samples and see what kind of polymers they had. That kind of information was one of Kristine’s key motivators for going back: to understand where the plastics are coming from and what we can do about it. In addition, they also used a NISKIN-bottle that collects samples from 25 meters below the ocean surface to look at what microplastics and fibres are moving around in the water column, to get a full picture of what plastic is actually out there. 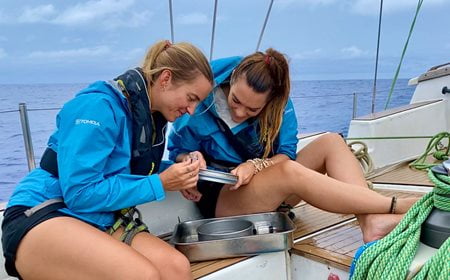 Kristine had two goals for her journey: gaining knowledge about the plastic problem, and sharing her knowledge of circular economy and land-based solutions with her fellow crew members. “It can be overwhelming to experience the plastic pollution, and I helped educate my crewmates on the solutions that already exist. Some come from regions with deposit return schemes and reverse vending solutions like TOMRA provides, and some have never experienced those before, so I wanted to show one of the tried and tested ways that we can help solve plastic waste. I wanted to share why it’s important for TOMRA to be part of eXXpedition and the fight against ocean plastic, and how close we feel to this mission as a company.”

She also wants to bring back her learnings to her local community and to TOMRA, looking at the projects and industry collaborations that can have the most impact. “Now that I am back, I’m sure I’m just going to talk everyone’s head off about how big the problem is and how there are so many things we can do to solve it.” Kristine hopes the knowledge brought back from eXXpedition will empower others to make better-informed decisions and inspire them to take action.

TOMRA is a gold sponsor for eXXpedition Round the World, and a member of the project's scientific advisory board. Stay tuned for more insights from Kristine’s journey on board the eXXpedition ocean plastic research mission.