Art activist trashes environmentalist/model in a dress made entirely of bottles and cans washed up on Australian beaches, to spotlight marine pollution and the importance of recycling. 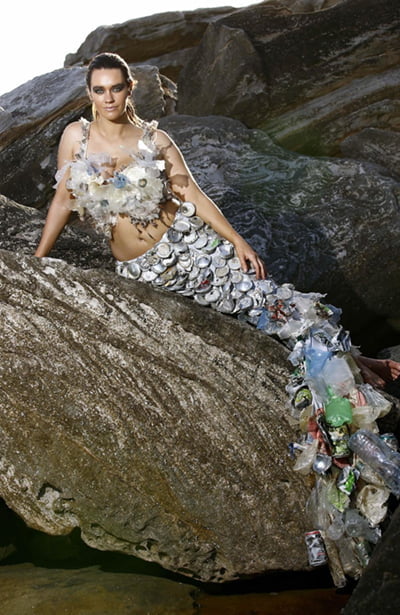 Australian environmentalist and model Laura Wells has made waves as a plastic mermaid – in a dress made entirely of drink container litter collected from Sydney beaches. Designed by “trashion” artist Marina DeBris, the project seeks to highlight the importance of recycling and protecting our oceans following a new container deposit initiative aiming to reduce litter in Australia.

The dress is composed entirely of washed up container litter that the award-winning artist picked up on her morning walks at Coogee Beach and Gordons Bay in Sydney. The dress is made of more than 60 plastic drink bottles, over 190 cans and over 90 bottle caps, re-fashioned into couture with a message.

Named “The Ones That Got Away”, the creation features containers that never found their way into the recycling system, but instead got littered and thrown away. The mermaid dress is the latest in Marina DeBris’ “trashion” series “Beach Couture: A Haute Mess”, which has been on show at Bondi’s Festival of the Winds and Sculptures by the Sea events.

MAKING A FASHION STATEMENT FOR THE ENVIRONMENT
Marine litter is an issue close to Laura Wells’ heart. As well as gracing magazines as one of Australia’s top plus-size models, Laura is an environmentalist with degrees in biology and law, and qualifications in environmental management. She has worked on environmental campaigns with The Boomerang Alliance, Greenpeace and the Marine Stewardship Council, and was vocal in the campaign to introduce the container deposit scheme in New South Wales.

“I am passionate about the climate, environment and our oceans, and really enthusiastic to see the positive impact the container deposit scheme will have on New South Wales,” explained Laura Wells. “I have worked with Marina DeBris in the past and was excited to bring her latest creation to life for such an important cause.”

Marina DeBris’ trashion creations have featured in Los Angeles fashion shows and even in exhibits at the Smithsonian Institute in Washington, D.C. “This piece seeks to shine a light on plastic pollution and how we can all make an impact by recycling our containers properly. Carelessly discarding bottles and aluminum cans not only destroys the beauty of our state, but can be harmful to local wildlife, and to ourselves.”

“Laura Wells and Marina DeBris’ efforts in drawing attention to litter prevention and ocean conservation truly get to the heart of what the container deposit scheme aims to achieve,” said Ryan Buzzell, President of TOMRA Collection Australia. “The new container deposit scheme here is the biggest litter reduction initiative in the history of New South Wales, and will have an enormous impact on reducing the amount of rubbish on our beaches, streets and waterways.”

“I often say I wish this would end tomorrow: there would be no more single-use items or pollution, and that I would stop thinking about it and I would move on to something else,” reflects Marina DeBris in the behind-the-scenes video about the making of the mermaid trashion creation. “I have to say I don’t think I’ll ever stop. As long as it’s out there, I’m not going to be able to walk by it.”